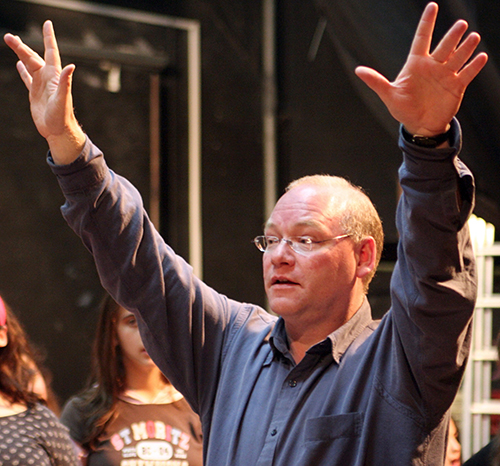 “Under the precise, flexible and fervent direction of Jeremy Summerly, the interpretation of the Oxford Camerata is remarkable” Compact

Jeremy Summerly graduated from Oxford University with First Class Honours in Music in 1982. After graduation, he worked as a Studio Manager for BBC Radio (1982-89), founded the Oxford Camerata (1984), and undertook musicological research at King’s College, London (1987-97). In 1989 he joined the professorial staff of the Royal Academy of Music, and from 1990-96 he was conductor of Schola Cantorum of Oxford. He has also acted as guest conductor for the New London Chamber Choir, The Cardinall’s Musick, the Chalice Consort (San Francisco), Ensemble Gombert (Melbourne), the Tallis Chamber Choir, and the Elysian Singers of London. He has conducted fifty commercial recordings spanning the music of nine centuries, and as a writer he has contributed articles to Early Music, The Musical Times, BBC Music Magazine, Leading Notes, and Classic CD; he is Choral Music Editor of Choir & Organ magazine. From 1996 – 2007 he was Head of Academic Studies at the Royal Academy of Music and from 1999 – 2007 he was also Head of Undergraduate Programmes. In 2007 he was appointed Sterndale Bennett Lecturer in Music.

Jeremy Summerly has given concert tours throughout Europe and the United States as well as in Israel, Palestine, Southern Africa, Australia, Indonesia, Hong Kong, and Japan. He has conducted at the BBC Proms, the Berlin Philharmonie, the Palestine Mozart Festival, and at the Tage Alter Musik in Regensburg. He has conducted world premières of music by John Tavener, Giles Swayne, Viktor Ekimovsky, Dmitri Smirnov, and Nico Muhly, UK premières of music by Franco Donatoni and Maciej Zielinski, and the London première of I am the true vine by Arvo Pärt. As well as working with choirs, he founded the Oxford Camerata Instrumental Ensemble in 1992 and the Royal Academy Consort in 2002; he has also conducted the Northern Chamber Orchestra in Manchester, the Ensemble Ste Geneviève in Paris, the Britten Sinfonia in Oxford, the Academy of St Martin-in-the-Fields in London, and Ironwood in Melbourne. In 1995 he was a recipient of a European Cultural Prize from the European Association for the Encouragement of the Arts (Basel, Switzerland) and in 2006 he was made an honorary member of the Royal Academy of Music. As a liturgical musician he sang for over a decade (1987-98) at St Margaret’s Westminster and from January 1999 until June 2002 he was Director of Music at Christ Church, Chelsea; he is Director of Music at St Luke’s, Chelsea. As a BBC Radio 3 writer and presenter he has made programmes in locations all around the UK as well as in Belgium, France, Holland, Iceland, Israel, and the USA. He has published four volumes for Faber Music: Gaudete! – Medieval Songs and Carols for upper voices (1999), Passetime with good company – Medieval Songs and Carols for mixed voices (2000), Fair Oriana – Madrigals in celebration of Elizabeth I (2002), and Thomas Tallis – English Sacred Music (2004). Since 1992 he has been a reviewer for Radio 3’s CD Review (formerly Record Review) and since 2003 a regular contributor to BBC Radio 4’s arts programme Front Row.

We use cookies to ensure that we give you the best experience on our website. If you continue to use this site we will assume that you are happy with it.Ok